One of the things I dislike doing is buying gifts for other people. This is partly because I don’t really like shopping (not even for myself) and partly because I never know what to get for others. So, when birthdays and Christmas comes around I often ask the gift receiver what they would like. You might think this isn’t very thoughtful of me, but it’s really a win-win for everyone involved. The gift receiver gets what they want and it saves me the headache of trying to figure it out. This year, when I asked my little sis what she wanted for her birthday, I was pleasantly surprised when she said all she wanted was cupcakes. Pleasantly surprised because I see it as a sign that she is growing up. That she is becoming more mature and would rather have something from the heart over store bought material goods. I see it as a sign that if she really wanted something she would work hard to earn money and get it herself. Or I could just be reading into it too much and she just really wanted cupcakes. Nevertheless, I was more than happy to oblige. I mean how can you go wrong with cupcakes? You really can’t. But I wanted to switch it up a little. Even though she asked for cupcakes, I thought they were a little over done (here, here, here, case in point). Instead, I wanted to make her whoopie pies. Now, who wouldn’t want some whoopie pies for their birthday? Just look at these beauties…

Sadly, my first attempt at making whoopie pies didn’t turn out as well. They were more like poopie pies (picture light brown pieces of dried up turd). Doesn’t sound very appealing does it? There certainly weren’t any cries of “whoopie” when they came out of the oven. 😦 I’m not sure what went wrong, but I knew it wasn’t right because the dough was really thick. I had gotten the recipe from a cookbook that was published in the UK and because of this the measurements were in grams. Since I don’t have a kitchen scale, I used an online calculator to convert the measurements to cups. I’m guessing something went wrong with the conversion…

Anyhoo, I never seem to learn. Last year, I tried making macarons for the first time for her birthday. That, too, failed although not as horribly as the poopie pies as they were still edible. I guess I should just stick to cupcakes from now on.

They are the perfect fallback.  And that’s what I did after my failed attempt at whoopie pies. Back to the good ol’ cupcake.

But once again I couldn’t resist trying a new recipe and a new flavour. With spring among us and the flowers in bloom, I thought a light lemony flavoured cupcake would be perfectly suited for the season.

These lemon cupcakes were a bit on the dense side. Perhaps I over baked them as the batter was perfect.

I would’ve also preferred them to be more lemony.

As for the cream cheese frosting…well, I have no complaints.

Cupcakes (adapted from my baking addiction)

I found the frosting to be a bit liquidity so I put it in the fridge for a bit before piping onto the cupcakes. After trying the finished product, the hubs suggested adding the glazed lemon peel to the batter before baking. I think this would’ve given it that extra lemon flavour that was needed. 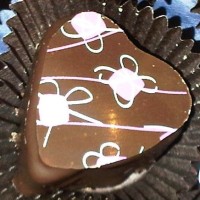