A couple of weekends ago, David and I went on a date.  I don’t mean the kind of date where you’re already out running errands and decide that you’re too lazy or tired to cook and that it would be easier to eat out instead.  Or the kind of date where you go to your usual place, order the same thing you always order and are out of there in less than 30 minutes.  I mean a REAL date.  One where you take the time and effort to get all gussied up, where you shower, put on some clean clothes and do your hair.  You get the drift.  After almost 4 years of marriage, we don’t go on dates as often as we’d like.  Other things, like work,  tend to get in the way.  And sometimes, we just can’t justify spending a week’s worth of grocery money on one meal out, but I’ll save this topic for another post.

On this particular date, the plan was to go see the Canada Muse Youth Symphony Orchestra (David’s uncle had given us tickets).  But before that, we had to fill our tummies.  As usual, we didn’t have a reservation or any idea what we were going to eat.  So, we just started driving in the direction of the Vancouver Academy of Music, the venue for the night’s event.  As we headed aimlessly to nowhere, I remembered a new restaurant (Suika Snack Bar) that had opened up on my bus route.

Suika Snack Bar is the latest izakaya to pop up in Vancouver and we had no idea what we were getting ourselves into.  There were no menus outside for us to scope out the offerings and prices.  We entered cautiously and were greeted with a warm and cozy, yet modern atmosphere.  That being said, I was not too pleased with the hostess, who told us we had to leave by 7pm because we didn’t have a reservation.  It was only 6pm and we were not planning on taking our sweet time.  We did have somewhere to get to after all.  As for the food, which started coming 5 minutes after we ordered, we had:

Edamame that came out warm, but slightly on the salty side.

The obligatory ebimayo, which was on the spicy side, but good!

And Chinese poutine, that tasted a lot like mapo tofu, but with fries and cheese.

We finished eating in less then 45 minutes, which I’m sure made the hostess happy.  All in all, the food was tasty and pretty affordable.  We would probably go back again if we wanted a change or less rowdy experience, but the more seasoned Hapa and Guu are still our favorites when it comes to izakayas.

As for the Canada Muse Youth Symphony Orchestra, they were surprisingly good.  Surprising because the kid that was practicing his trumpet before the show started wasn’t very good.  The night showcased (young) Korean musicians that played the oboe, classical guitar and traditional Korean mini saxophone as well as a performance by a Korean soprano.

Recently, we went to Seattle to take advantage of the exchange rate to purchase much needed work and wedding attire.  Along the way, we stopped to take in the beautiful and colourful tulip fields at the Skagit Tulip Festival.

We were lucky to catch the tail end of the festival while the tulips were still in bloom. 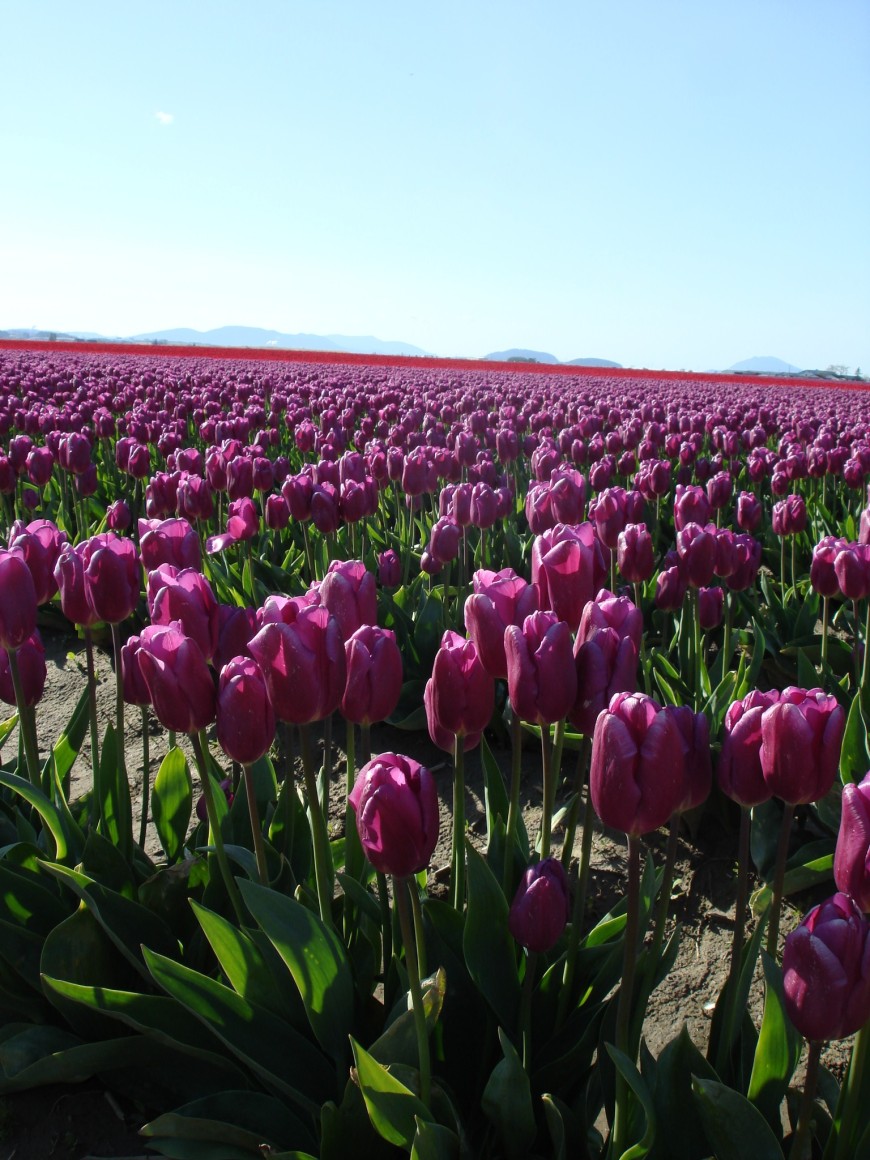 After waking up from a good night’s sleep due to getting our hands dirty earlier in the day and the long drive, we had to figure out what to eat for breakfast in order to give us enough energy for a day of shopping.  We decided to forgo our usual McDonald’s egg mcmuffin meal and went for french pastries at Le Panier instead. 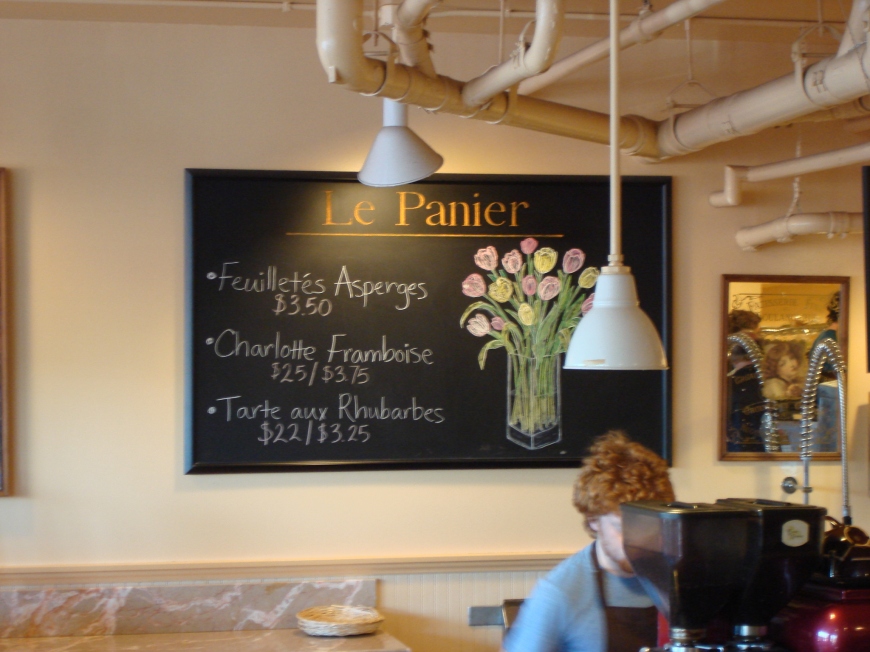 The line-up was at least 15 minutes long, longer than you would expect on a Sunday morning at 9:30am.  Were all these people waiting locals or tourists that read the same hotel visitors’ guide as us? 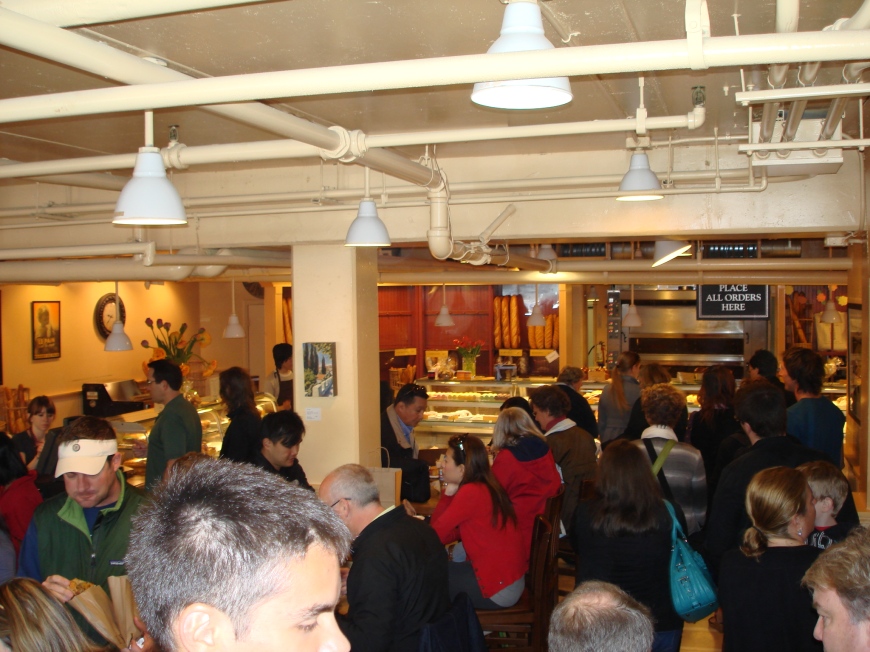 The wait for coffee was also long, so long that David already finished his breakfast before we got our caffeine fix.  But the wait was worth it! 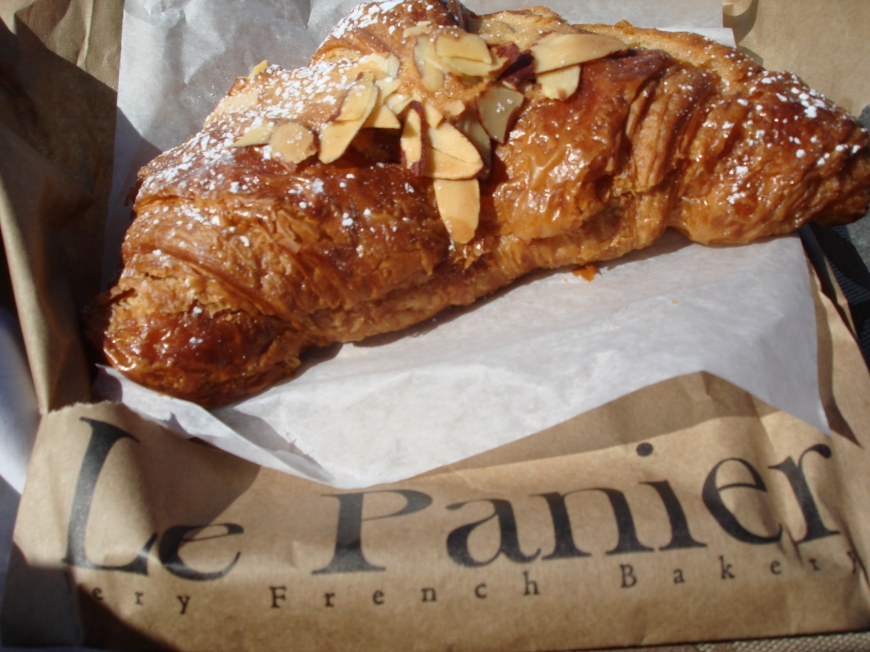 I got an almond croissant that was light, flaky and buttery on the outside, but not too oily like croissants tend to be.  The inside was filled with a yummy almond-cream and it was topped with perfectly toasted almonds.  It was much better than the almond croissants I used to get at my old neighbourhood coffee shop.  I’m going to have to make these croissants in one of my food trials!